Back at Base and out again

After three weeks on the Roi Baudouin Ice Shelf Area we returned to the Princess Elisabeth Station with an about 9 h Skidoo Trip. Our time on the ice shelf has been very productive. We collected around 200 km of radar profiles, measured several stake arrays with phase-sensitive radars, collected our GPS station at Derwael Ice Rise, resupplied the tweeting ice-shelf with new batteries and left two radars in overwintering mode (i.e. measuring every hour). We had a lot of fruitful scientific overlap with the BENEMELT Team and we hope to present the first solid scientific findings soon. Maybe we are a bit over-excited at this instance, but the datat looks very good indeed! 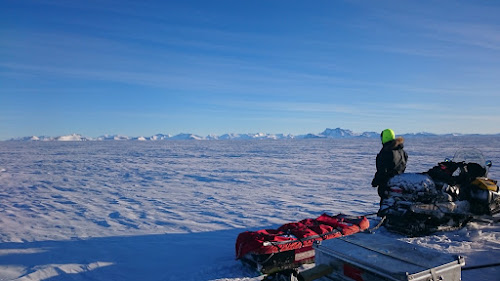 Mostly good weather, and very good field support from Sanne, Guenther, Frank and Erik (all part of the Belgian Military) made a successfull trip. After one recovery day at the base (with showers, hooray!), we will be heading out again towards the Antarctic Plateau to have a look how the GPS on Yet Nunten is doing. Slowly but surely our departure from Antarctica appears on our horizon, currently we are supposed to leave next week thursday.

Posted with Blogsy
Posted by IceCon at 9:11 PM 179 comments:

After a Monday of storm, we spend a full day of digging out the camp and the ROB1 cGPS station on Derwael ice rise. The receiver and batteries box were buried about ~2.5-3m of snow due to accumulation and subsidence during the past year. The station is now removed after more than 3 years of full data without interruption. After this huge shuffle-party we reoccupied pRES profile already measured during the 2014-2015 BELARE by Frank and Brice.

Then IceCon team went back to RBIS2 where the Benemelt team (Stef and Mark) together with Erik and Gunther were working for more than one week. Since then the sun is shining and sun screen seems to be more important than gloves. During our absence Benemelt visited lakes around the camp, there is quite a lot of water around here. IceCon has since started its geophysical measurements with shallow and deep sounding radars. Benemelt and IceCon mutually inspire each other and every morning profiles are adapted according to the latest results. Days are long and our hard disks gradually fill up with the recovered data. Our field guides Sanne and Frank are preparing another move to a far-out satellite camp, we will keep you posted. All goes well here.

Posted with Blogsy
Posted by IceCon at 10:14 PM 2 comments:

This is an update directly from the field.

The IceCon and Benemelt teams arrived on Thursday at an already prepared basecamp near the grounding line of the Roi Baudouin Ice Shelf. The skidoo travel was about 10 hours, including a visit to check on the Asuka cGPS station (everything is running here). With the sun brightly shining the day after, we managed to install a phase-sensitive radar which measures ice thickness changes (and hence basal melt rates) continuously every hour. Once a day a control message is sent to our office in Brussels. This instrument is part of a larger network on ice shelves around Antarctica, many of which are maintained by the British Antarctic Survey (who gave us great support in managing the instrument, even with messages relayed from the Filchner Ronne Ice Shelf). Our guides Sanne and Frank prepared in the meantime our traverse to the front of the ice shelf. We left the next day, and found all three instruments (two times GPS referred to as the TweetingIceShelf, and another phase-sensitve radar) which were left in overwintering mode by the previous IceCon Expedtion. After a resupply with fresh batteries the GPSs started tweeting instantaneously, and 15 GB of data from the pRES are waiting to be processed. Knowing that the weather was turning worse Sanne and Frank went ahead to Derwael Ice Rise to install the dome tent (a Stronghold) in case of bad weather... but the storm was already there so it took them 4 hours to install the dome and the sleeping tents in extremely harsh conditions. Reinhard and Nico arrived a few hours later (after finishing up some pRES measurements) and were happy to see the Camp fully functioning. However, the Skidoos almost drove into the tents because of the complete whiteout. Today the storm continuous making it impossible to work. We sit here quietly awaiting the end of the storm which gives us the opportunity to write this somewhat lengthy blog update and send it out via satellite communication. Weather prediction tells us that winds should be less strong by Wednesday evening. 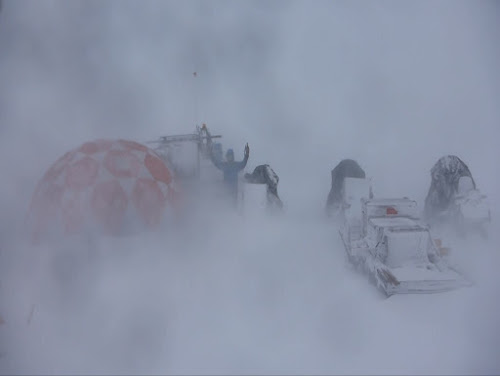 Posted with Blogsy
Posted by IceCon at 6:54 PM 1 comment:

It took 10 hours skidoo driving across the path laid out by the Prinoth during the night, to arrive at the camp site on the ice shelf, near the grounding line. The camp is called RBIS1 and is at the site of the meteo station from the BENEMELT project (http://benemelt.blogspot.com). The first activity was to put the new ApRES (phase-sensitive radar) in place in one of the channels on the ice shelf. Data are collected regularly and transmitted automatically via Iridium. The next day was devoted to retrieving the GPS stations on the ice shelf (the so-called tweeting ice shelf -http://tweetiniceshelf.blogspot.com). Both systems stopped working due to battery failure, but they ran for one year, which was their design period. Unfortunately, since the expedition was delayed with one month and a half, we have to cope with the data gap. Both systems were successfully retrieved, dug out and repositioned. The antennas were still 1.5 meter above the snow surface. The relatively low accumulation is probably due to the wind action in this area of the channels. However, the flags that indicated their position were tilted or down on the snow surface. Luckily that the precise coordinates of the sites were known (thank you tweeting ice shelf!). Both systems are again transmitting data live. The old ApRES radar was also dug out. It took about 2 hours with 4 people to clear the job, but 1.5 gigabytes of data were recovered from the system. It is now used to remeasure all other points that were measured last year. All activities need to go swift, because a storm is expected on Monday. The purpose is now to move to Derwael ice rise as soon as possible and to retrieve the data from the geodetic GPS systems. All ApRES measurements across the ice divide also need to be done. So far, so good. 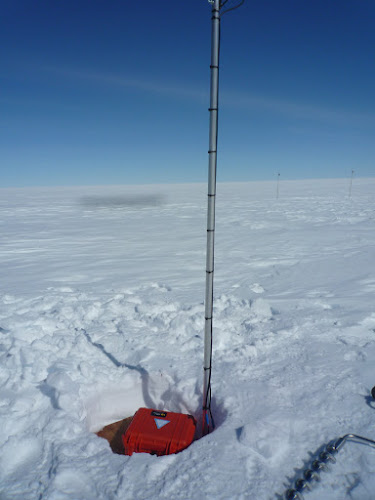 Posted with Blogsy
Posted by IceCon at 9:00 PM 1 comment:

Tomorrow morning we are going to saddle the horses and drive to our first (out of four) research sites near the grounding-line of the Roi Baudouin Ice Shelf. The last two days were dedicated for preparing every little details: the oil for skidoos, the GPS coordinates of turning points, the battery connecters, the ropes, the food, the latest satellite images, the fuel, and so on and so on. All the preperations were done with excellent support from staff at the station, and we feel very well preparted to go. For the next three weeks we will be without solid internet connection for blogging, but some updates will be given via the Iridium telephone. We set out the geophysical survey lines for a maximum possible coverage over the three/four weeks time frame (see image below). If we manage to cover even half of all the lines we will already be quite happy. The weather looks good, the sun is shining (as it always does), and we will hop into a final shower this evening. 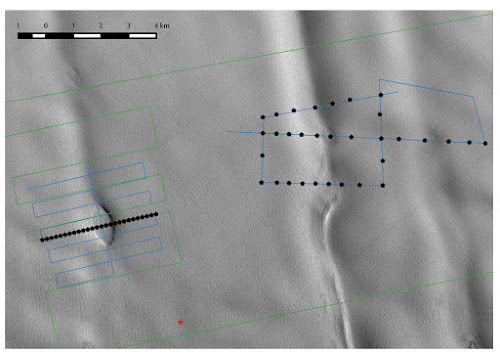 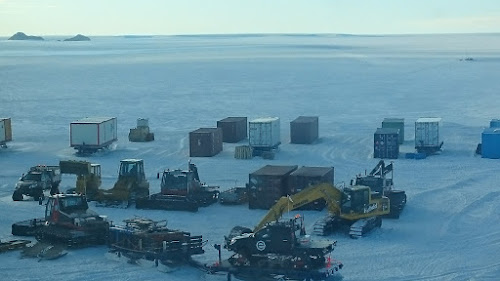 Posted with Blogsy
Posted by IceCon at 11:57 PM 2 comments:

10 months of Data from the Yet Nunten GPS station

Today Sanne led a Team around Nicolas Bergeot towards the Net Nunten mountain, which is situated between the Princess Elisabeth Station and the cold Antarctic Plateau. This station was difficult to maintain in the past because of the extremally harsh conditions (strong winds + low temperatures) and we were pleased to find that the station was operational until October 2015 before it entered into the same stand-by mode as we already observed at Asuka station. With two down, there is still one GPS to go, which is situated at the coast on top of Derwael Ice Rise. This station will be dismanteld, and we plan an organ-transplant so that Yet Nunten makes it through another year.The support of the station is great and today testing of our lower frequency radar was successfull. Our envisaged date of departure from the station to the coast is Wednesday. Posted with Blogsy
Posted by IceCon at 10:14 PM 1 comment:

Today, Nicolas Bergeot and Olivier Francis were accompanied by a crew of PEA lead by the field guide Guenther to visit a continuous GPS station, which was initially setup by IceCon in 2012 at Asuka (an old Japanese station). This time the station measured continuously until the end of January 2015 when the GPS receiver went into an unexpected standby mode in spite of full batteries and operational solar panels.

Nico will have to investigate as to why this has been the case so that we can modify the system for the coming year. Other than that our phase sensitive radar has been setup and we are currently testing the overwintering mode and the corresponding Iridium data transmission.

Tomorrow, Nico and Sanne, the chief of the field guides, are going to head out to Yet Nunten (close to the Antarctic plateau) and see how the continuous GPS is doing over there. Once all material has been successfully tested at PEA, we will be preparing the traverse to the coast which will hopefully commence in a few days from now.

Posted with Blogsy
Posted by IceCon at 11:06 PM 1 comment: